I don’t feel like I stitched that much this month; I’m house-sitting for a few months and haven’t really adjusted all of my routine yet, including a place and time to stitch. I work nights, and I’m mostly sleeping when I was stitching at home; I would nap earlier in the afternoon (if needed) and eat dinner with everyone else and watch TV and stitch after dinner, and now I’m mostly eating earlier and napping later in the day. I did abandon the blackwork project completely for now; I didn’t even bring it with me.

Mostly, I worked on Jupiter from SpaceNavid on Etsy because it’s small and portable and I have the chart printed out, so I take it to my sister’s when I go for dinner and/or TV (no cable here). I do have the charts for the others, though I’ve been working from scans for 99. The other one is small, but it’s for a Christmas card that I don’t want my sister or her family to see before then. I think most of Jupiter’s progress is from this month; I did a couple of stitches in February when I bought the chart and I might have worked on it some in March and forgotten to take a picture of it (I keep it in a tote bag). I’m not entirely sure I centered it correctly, but it will have to do. 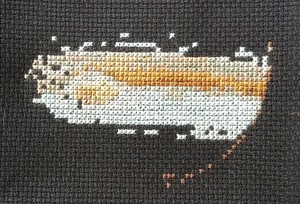 I worked a little on Aluminum Tree by Misty Hill Studio from their Mid-Century Modern Christmas collection. If I can continue making a little progress every month, I can hopefully finish it by Christmas. 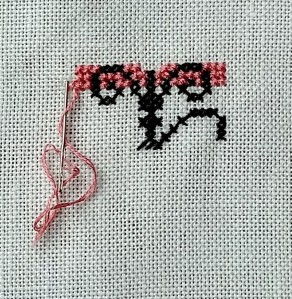 I didn’t work as much as I thought I had on 99 by Ink Circles; I think I completed one whole bottle and parts of two others.